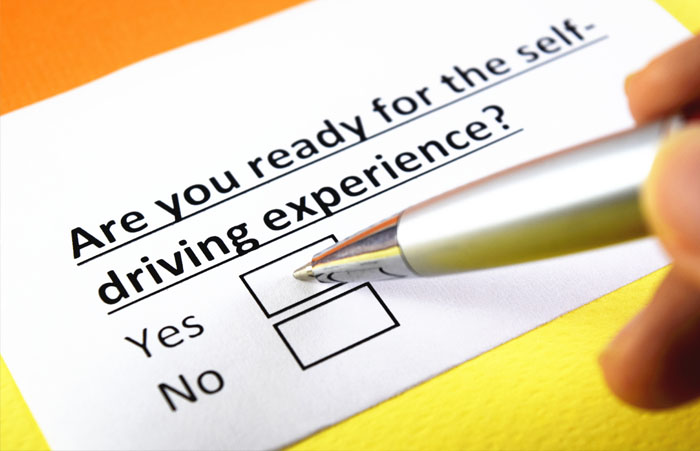 Just a decade ago, self-driving cars were relegated to science fiction and the dreams of a handful of technologists.

Today, self-driving cars are already on the roads. Uber is using them to pick up passengers in Pittsburgh. Self-driving features are built into the latest models of Mercedes, BMW, and of course, Tesla – although these cars still require a human driver to be attentive and ready to assume manual control at any moment.

In recent months, we’ve seen a number of new billion dollar investments and commitments by some of the world’s largest auto companies. With all of this activity and progress, it is inevitable that we’ll soon see fully-autonomous, driverless cars all around us, adeptly navigating traffic and chauffeuring their passengers about.

How Soon?
Industry experts estimate that 25% of cars sold will be self-driving by 2030. Source. But these new cars will have more commercial applications initially, in the form of trucking fleets and taxi services. GM has committed to putting self-driving cars on the road in the near future, as part of ride-sharing provider Lyft’s fleet of “taxis.” Ford has similarly committed to having a fully-autonomous vehicle commercially available as early as 2021, as part of a ride-sharing fleet.

How Safe?
Robert Hartwig, president of the Insurance Information Institute (III), estimates that traffic accidents will be reduced by 80% in self-driving cars. That’s great news for drivers. Source.

But until the technology is mature, early adopters still need to be wary. In recent news, an unsuspecting driver of a Tesla Model S car was reportedly not paying attention to the road while using Tesla’s still-in-beta “Autopilot” feature, trusting that that the car would drive itself and be able to identify and navigate around potential hazards. In this case, a semi-truck blocking the lane was not identified by the car’s sensors, and the car proceeded ahead at full speed, with a fatal result.

Horrific anecdotes aside, the statistics still suggest that self-driving technology is already safer than the alternative. For example, Tesla claims that this was the first fatality among Tesla drivers using the Autopilot feature in more than 130 million miles driven; in the United States, there is an average of one fatality per 94 million miles driven. But, does this difference have any statistical significance?

If So, How Much (In Financial Terms)?
Autonomous cars should cost less to insure than human-driven cars, if predictions about accident rates are directionally correct. Young drivers, who are higher risk and more expensive to insure, will receive the largest benefit from premium discounts. Parents may encourage their children to go straight to a driverless car and skip drivers’ education entirely. Will you miss seeing teenage drivers speeding through your neighborhood?

Insurance companies are likely to wait to dramatically reduce insurance premiums until they have clear data that accident rates are dropping.

This promise does come at a risk. With self-driving cars, many cars will become vulnerable to hacker attacks. For example, criminals could hack into your car’s operating system, lock the engine and demand an instant ransom in exchange for unlocking your car while you are speeding down the highway (what would you do?). Experts agree that hackers are more likely to seek a ransom than intentionally cause an accident, because they’re motivated by money (and not a malevolent desire to harm you).

As self-driving cars zoom into the reality of our everyday lives, society will be hit with many consequences, many positive – but some, less so. Will the desire for convenience and machine intelligence compromise aspects of our safety or privacy?

Only time and technologists’ careful development of this promising technology will tell.